This month at Albury Books, we have been having some fun creating gorgeous fixed layout eBooks from our picture book catalogue. As we have an extensive list of children’s books, we’ve been experimenting with the digital content we can create for children, while making every effort to maintain the incomparable charm of a printed book.

What is so lovely about our digital versions of each title, is how the quality of our digital production enables an eBook to be seen as a viable and convenient alternative to print, without having to compromise on the quality of a printed colour book.

Whilst nothing compares to the experience of reading a physical book, creating high quality eBooks for children means they can experience all the magic of their favourite stories and characters, even when they are out-and-about. Of course it also means that it’s no longer necessary for their parents or guardians to lug around a bag full of heavy, increasingly dog-eared books all day - great news all round!

Many authors and illustrators are also turning their works digital to supplement existing print editions, and it’s a great way to revive dusty backlist titles! Another reason that digitialisation is becoming more and more popular, is the financial attractiveness in the one-off cost to create digital files. Once ready, these files can be put up for sale and because there is only the nominal creation cost to recoup, the profit margins on mid to long-term sales of eBooks are often very attractive.

Increasingly, we have also seen demand for digital picture book creation as a way for authors and illustrators and small publishers to test new products in the market. While a book has much more charm in its physical format than when presented on a screen, a title’s digital popularity can be an invaluable tool for gauging the viability of funding a print run for small publishers and individuals alike.

If you’ve created a children’s book and think that digitalisation could complement your current offering, we can offer you the tools to make it a reality. You don’t need to be a tech-wizard and you don’t need to spend a fortune! Our digitalisation options are diverse, and with some technical magic we can also add some extra sparkle to your digital children’s titles with animation and sound.

Whether you want to bring characters to life with simple animation, or have the story read to the child with word-synced audio, the diversity of our digital capabilities means that we are able to provide a wide range of affordable options to all our customers.

With our no obligation samples for fixed layout eBooks, you can see for yourself the impressive quality of our digitalisation work. If you are impressed - which we’re sure you will be - we’ll create the final versions for you to sell direct.

To find out more about our eBook services, or to enquire about getting a fixed layout sample, contact us today.
Posted by Writer at 05:15 No comments:

Lesley Cheetham is an author and librarian at the Elizabeth Garret Anderson School in London, who has self-published a trio of brilliant YA novels under her personal imprint, Lambchop Publishing. She joined up with Albury Books earlier this year in time for the publication her most recent novel, Lightning.

With all four of Lesley's titles now under the Albury Fiction imprint, we are delighted to be able to announce this evening's launch of Lightning, in London, at:

Lesley's second YA novel, Her Other Voice, is the follow up to, Her Sister's Voice, which won the prestigious Islington Read Teen Award, beating off competition from RJ Palacio's, Wonder, Jeff Kinney's, The Third Wheel, and David Walliams', Demon Dentist.

Each of Lesley's books place a focus on the issues that many teenage girls face as a result of the constant pressure and expectation they feel to perform in their lives.

Her Sister's Voice, creates a poignant comment upon the deafening volume that the inner voice of 'I'm not good enough' can reach. This is extended by Lesley into an exploration of how behaviour patterns such as repetition and denial, which initially are often used to combat and find some control amongst feelings of inadequacy, become all encompassing and driven forwards by an increasingly irrational and demanding Voice that inhabits their psyche. The book charts Leila's battle to defeat the Voice inside of her, but despite her efforts, the challenges that are placed in her way by the circumstance of life serve only to make her battle more difficult.

The character of the Voice in both books, develops into a menacing and uncontrollable force, picking its victims from among the insecure and self-questioning. Yet, all the teen characters in both, Her Sister's Voice, and its sequel, Her Other Voice, conform to this character trait in one way or another. The only difference between the characters is that the victims who suffer the most, are those who have stayed silent about their troubles, whereas those who share their problems are able to overcome them before they become an overwhelming burden. 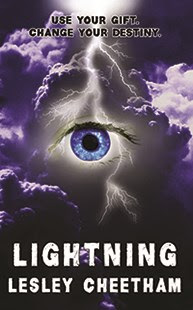 In Lightning we see the same themes of compulsion rise again, with the main character fighting against anxiety and OCD, however unlike in HOV and HSV, this is something that Elsie manages to find a way to control before it consumes her. The book itself follows Lesley's change of sub-genre direction, begun with her mystery-driven third book, Someone Like Me, which was named Islington Council's Book of the Month. Lightning is driven forwards by remnants of the effects that Elsie feels after being struck by lightning. Now able to see things in a new light, her voyage of discovery is given direction by the mystery that reveals itself to her, whether it's wanted or not. The tandem voyage of self-discovery that Elsie goes on when distracted by the events around her, show how change can be good and how you can overcome your fears by facing them head-on.

The diversity of Lesley's four novels, and the ease with which she creates relatable and sympathetic characters in her stories, has proven her to be an exciting and talented YA author who shines a much-needed light into the darker portions of a typical teenage mind. Thoughts and feelings that many readers will be familiar with, are presented starkly on the pages of each of her books, creating for the reader a kind of cathartic acknowledgement that you are not alone. It's just that all too often, people are so worried about what others will think, that they hesitate to talk openly about them.

We would like to wish Lesley all the best of luck for her launch this evening, and very much look forwards to working with her on more of her fantastic books!


If you have any queries about Lesley Cheetham she can be contacted through her Facebook Page, or if you would like to buy any of her books, they are available from Lesley's Albury BookShelf